What do nosebleeds and balloons have in common? 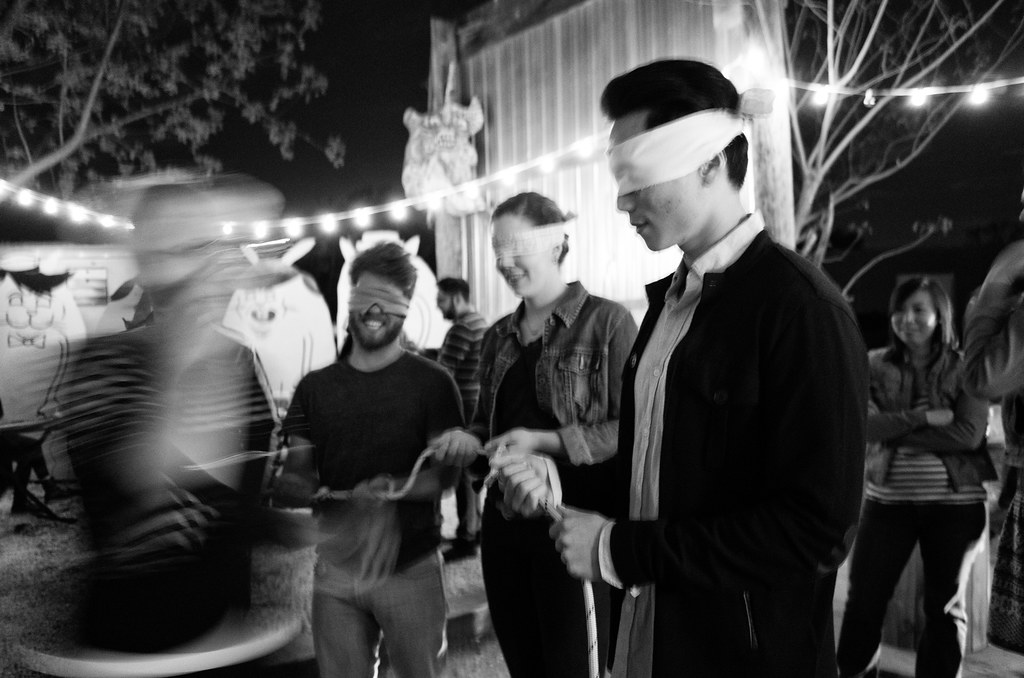 A few weeks ago I went to this art exhibit called "In The Dark" at the Museum of Human Achievement, formerally a large sex-toy warehouse, now art gallery. You were blindfolded, and led inside the warehouse in groups of 4-5 people by a single tour guide. The person in the lead holds onto the guide's hand, and the rest are tugged along with a rope through various sensory exhibits.

"Open your mouth. I'm going to put something in it."

"Watch out, there are stairs here."

The laying down part blew my mind, and inspired my previous post. 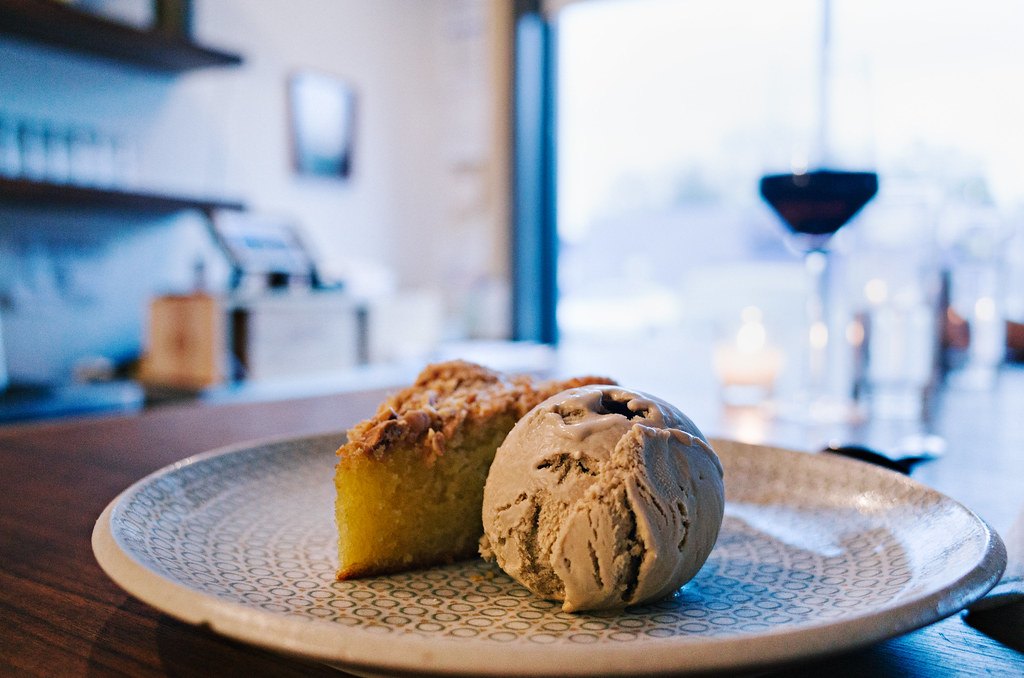 I left the exhibit and had to reason through everything that just happened. Then it clicked. Just a particular smell can transport me back to another period of my life. The most important part of eating is when you're playing around with the food in your mouth, meshing the components together with your tongue, noticing the texture and temperature differences. The most intimate part about being with a person is when they're close by. The climate of your environment has dramatic affects on your mood and how you feel. The idea that someone can get lost in music, or even ambient sound.

Well, since I'm so good at combining elements and noticing shit... Why don't I do my own exhibit?

To pluck out the things that make an experience an what it is, and then rapid fire a person through a lot of them by quickly changing sounds, smell, temperature, and food.

That would be cool wouldn't it?

If you're interested in collaberating with me on this, please contact me, I have a due date of May 26th to get something together, and a lot of resources and space for us to work with.

Did a lot of stuff within the past few weeks. 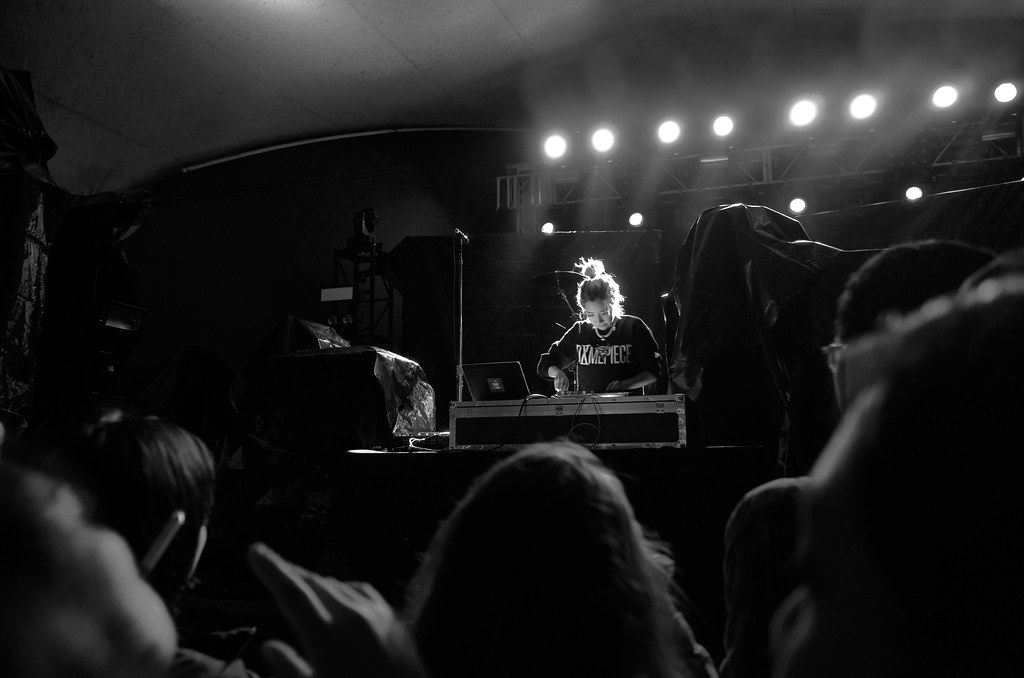 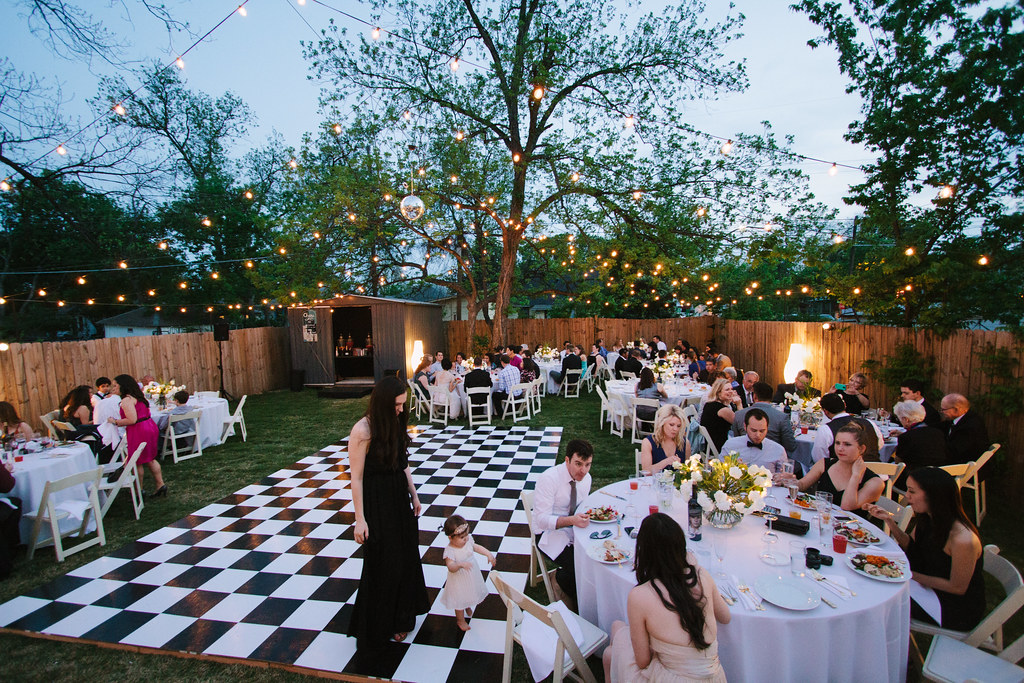 Had a great time at Riley & Anna's wedding, which was hosted in their backyard. Those who know me... know I don't have any formal clothing what so ever. Luckily, Service menswear saved my ass. 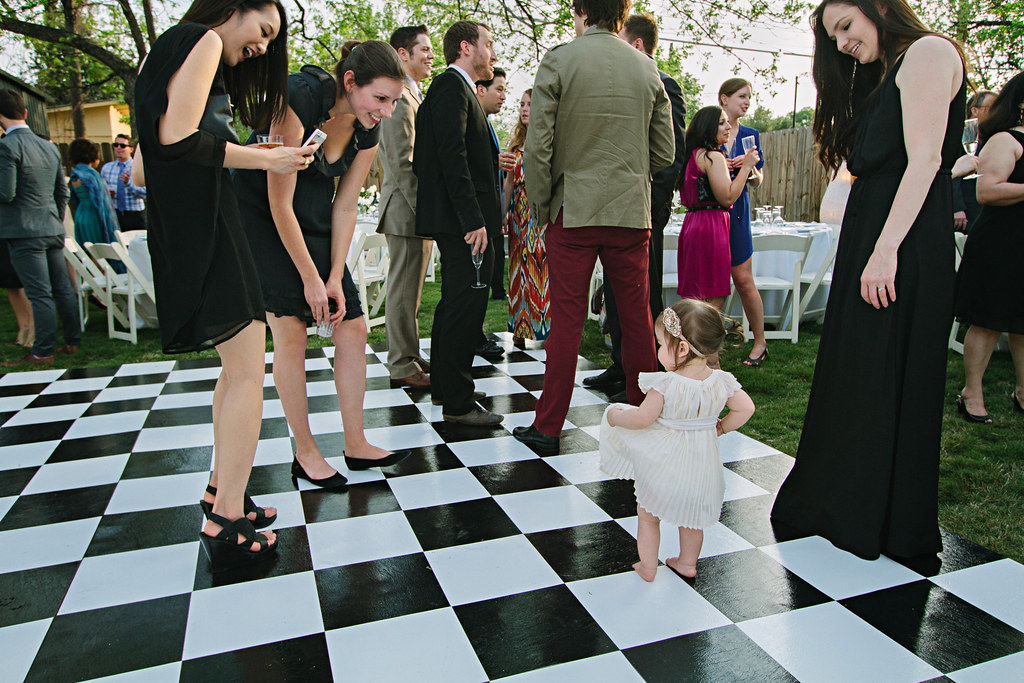 Madeline enjoyed taking photos of this one particularly cute baby that showed up, 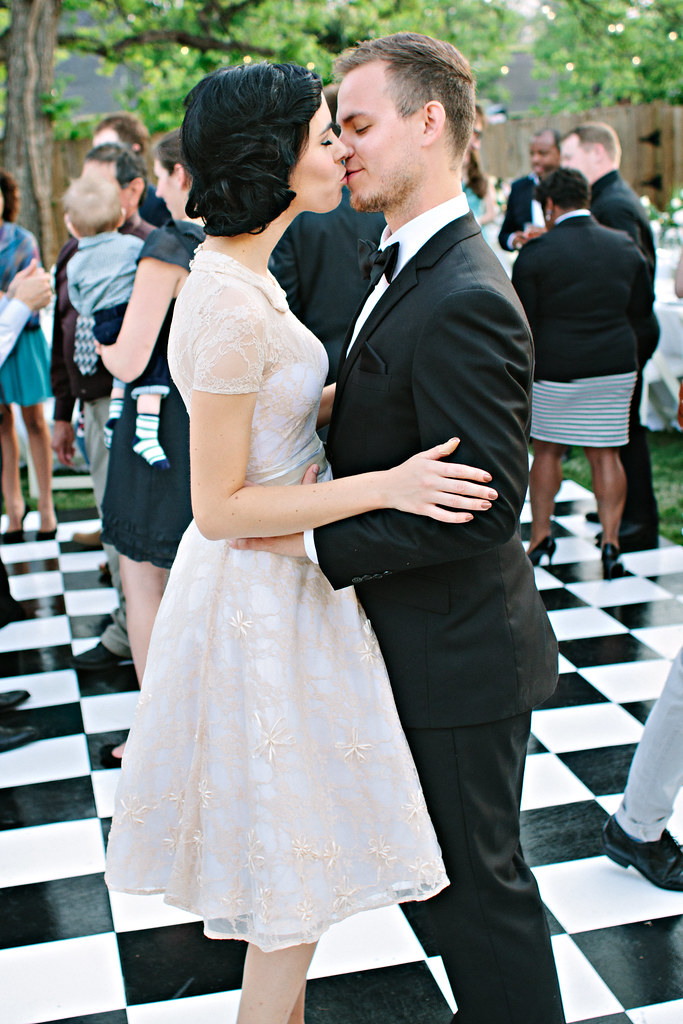 and I served as a make-shift wedding photographer (sorry for the wedding photos, but this couple is cool, okay?) 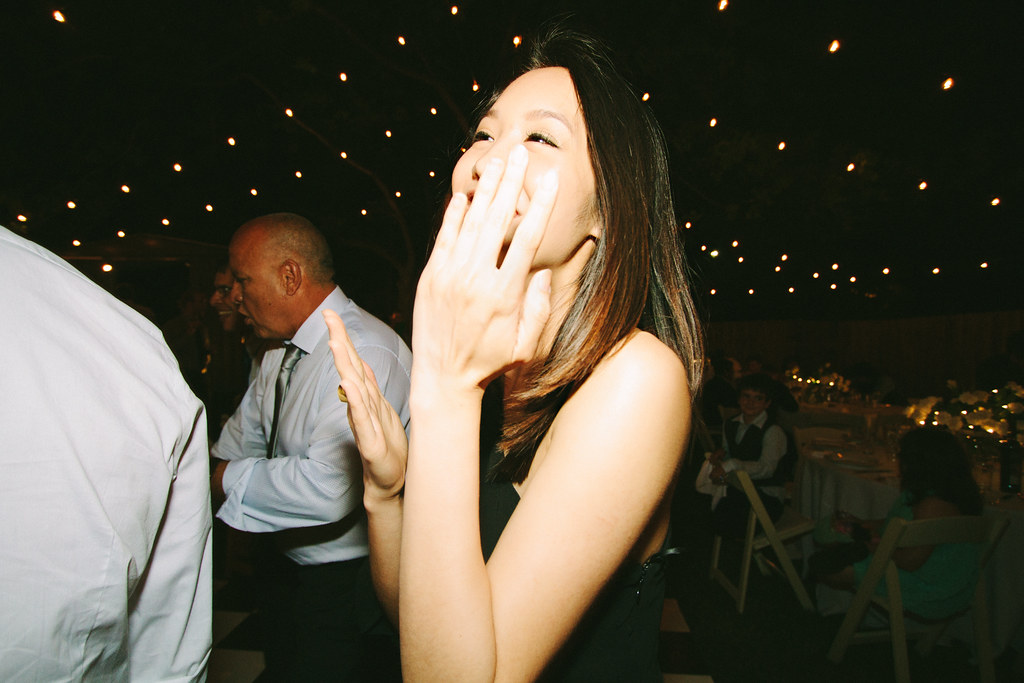 Despite having an awesome dance floor, the music playlist was lackluster... in the end we just went with it. 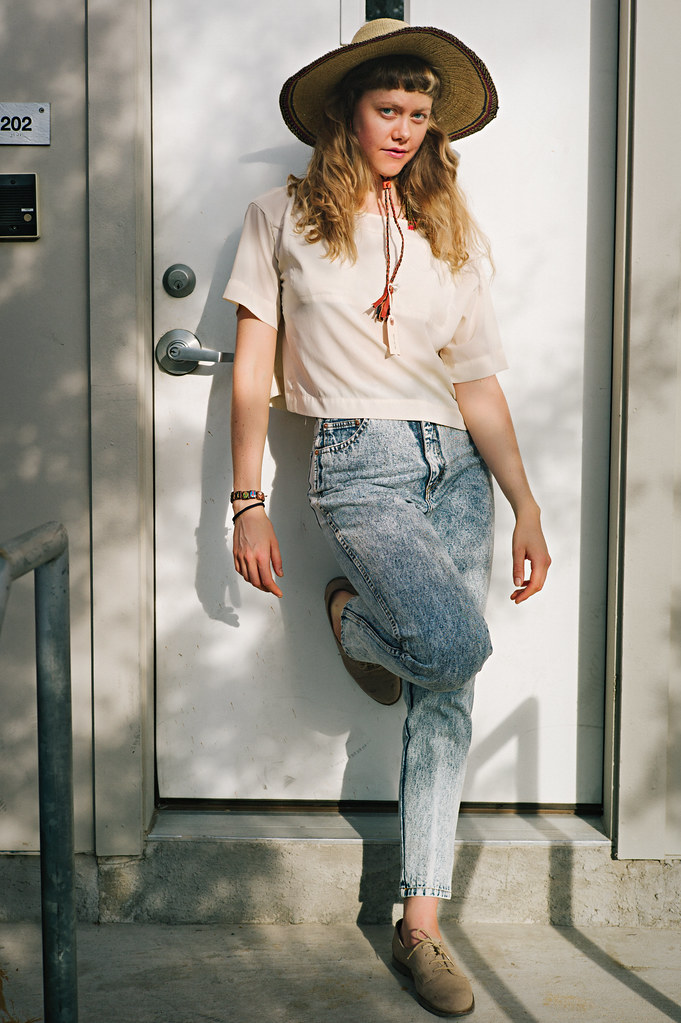 Right before the wedding, we did a small shoot using clothes from Solid Gold with Peter, my photographer extraordinare friend, who's saved my ass in the past. This is Julia, who's an amazing chef and model. Check out her instagram. 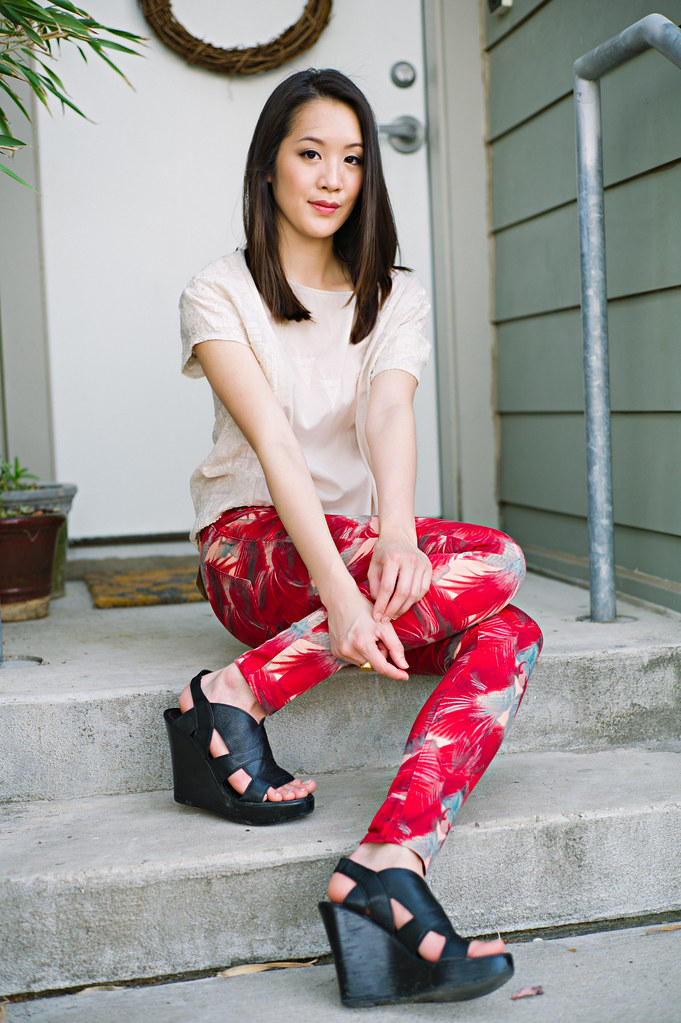 This is probably the only good photo I got from the hour we had, so you should definitely check out photos from Peter's Set.

Jocelyn's company, Adonit, shot a commerical in our coworking space. It was interesting seeing how they transformed our mostly unfurnished room into a functional office space. I especially liked the office plants they put in. 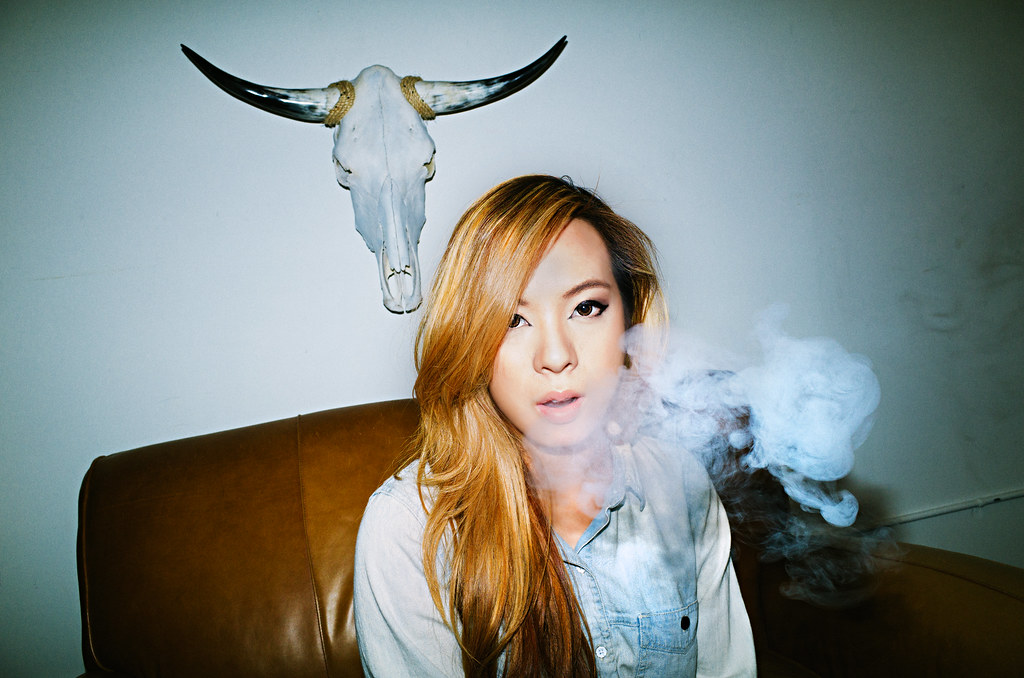 With an e-cig and old-school flash handy, we took a couple quick photos after they were finished. 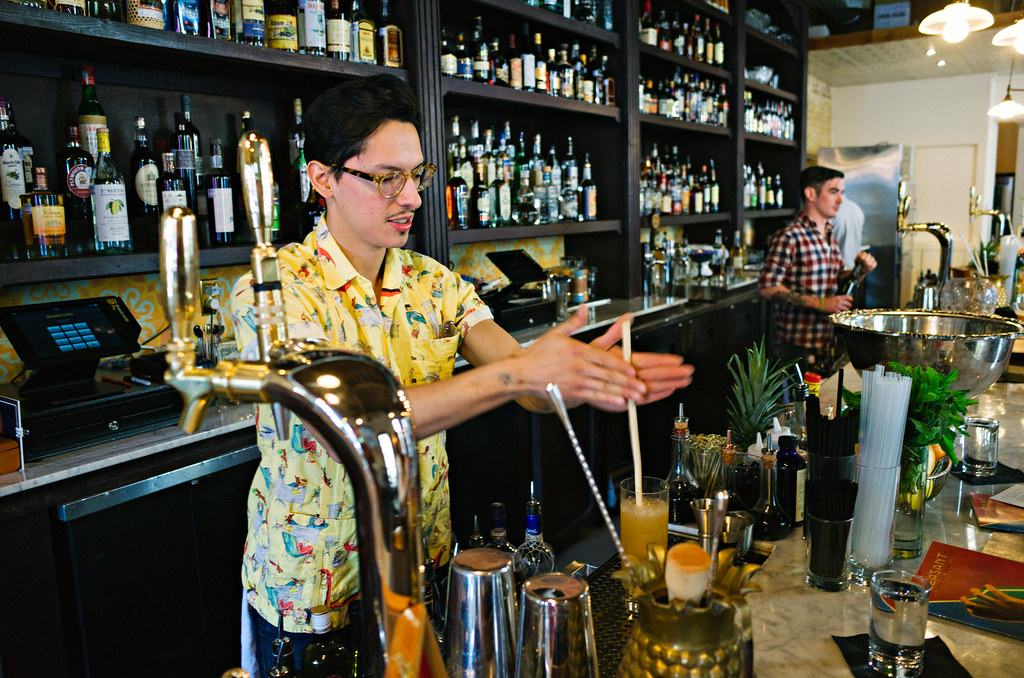 Alfonso, my former tennis partner and bartender at East Side Showroom, opened a new bar called Pleasant Storage Room located next to Peche on 4th st. It's Cuban/tropical themed, and good alternative to Peche when you're in that part of town. 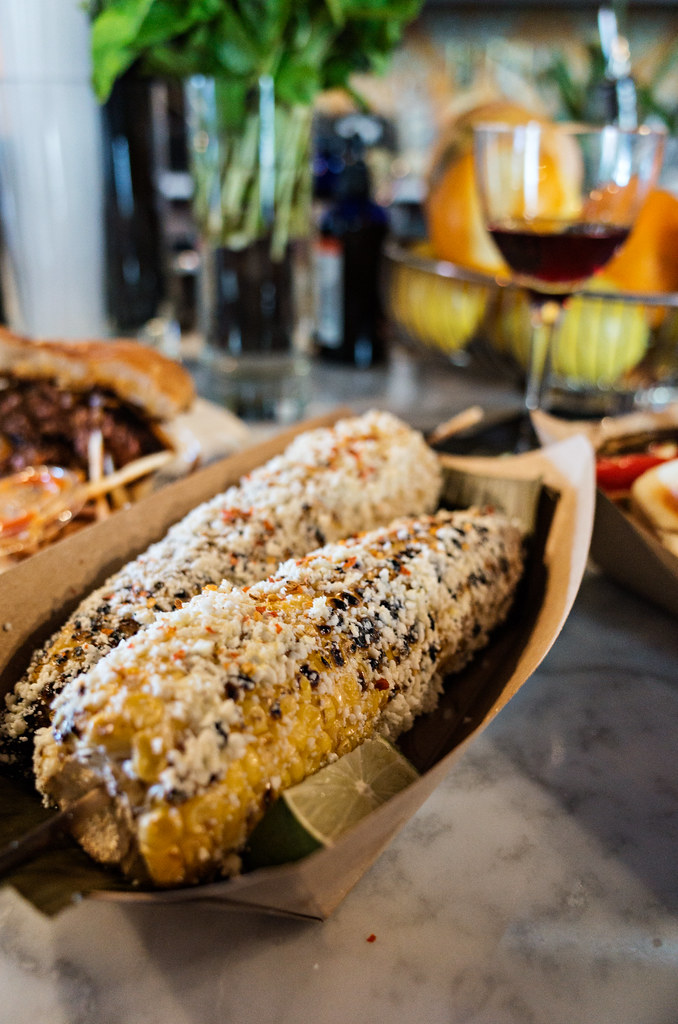 Though it's pretty basic, I recommend getting their grilled corn. As for cocktails, if you haven't had the Einstein of the Beach, you must.

It just opened officially this week, so go check it out!

Coding classes have been going well for the most part, we're at a point where everyone is seeing the use of everything we've taught them so far. Now they can make queries to JSON api's, and since they know how to navigate hashes and arrays, they can now go through the data to make apps such as... cat facts, using the random cat fact api with twilio, to send them to your phone. 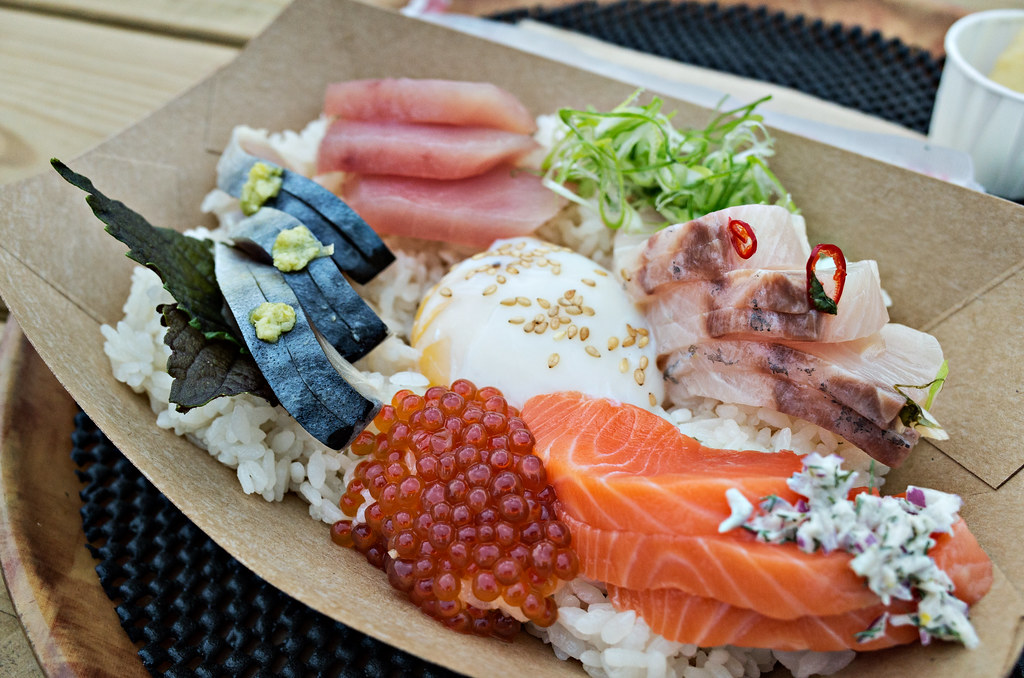 There are 2 new food trailers that you should know about. Patakon and Kyoten which are located on E 6th St. near the Brixton. 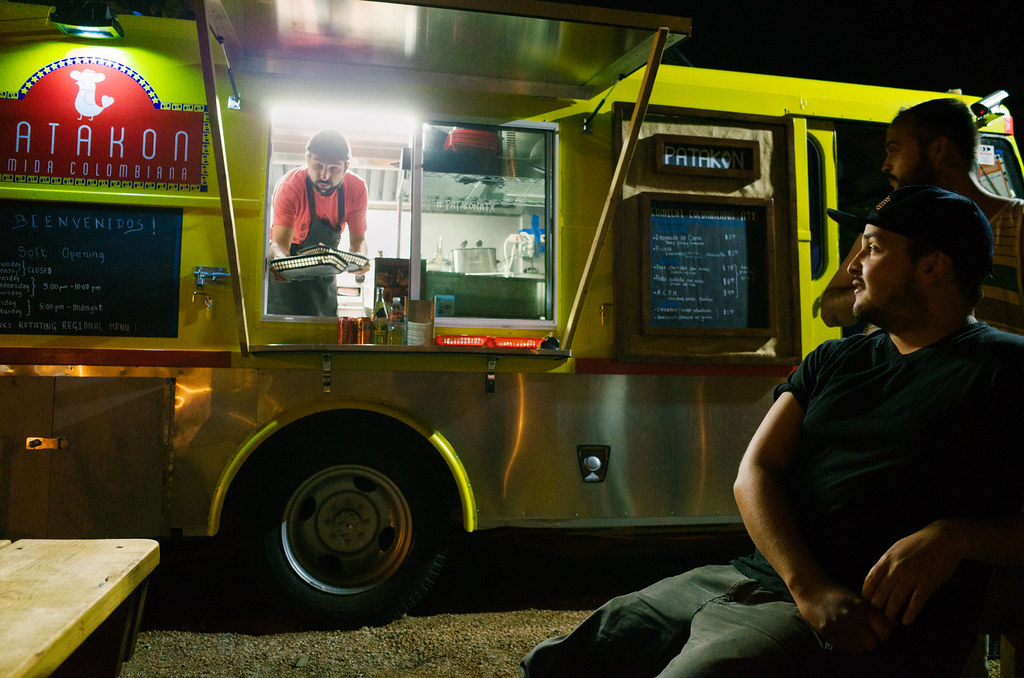 Both are associated with Ramen Tatsuya, and are definitely worth trying. You'll notice the quality of the rice at Kyoten, they make it better than any other sushi place I've been to in Austin, including the fancier ones, but the cuts of fish they get aren't too primo. Patakon features columbian cuisine, I ordered a wonderful trio of fried tripe, sausage, and an empanada, super tasty. 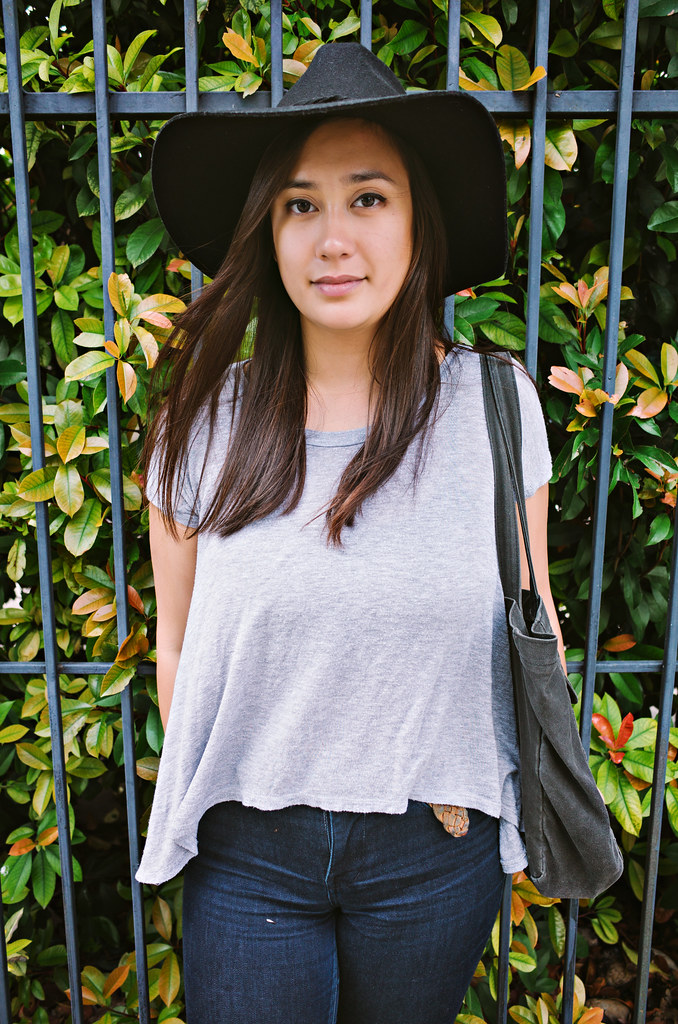 I spent the better part of Friday hanging out with Michelle, showing her my usual places. We had lunch at my favorite hole in the wall place on 7th, looked at the new selection of books at Farewell Books, hanged out at Brew & brew, 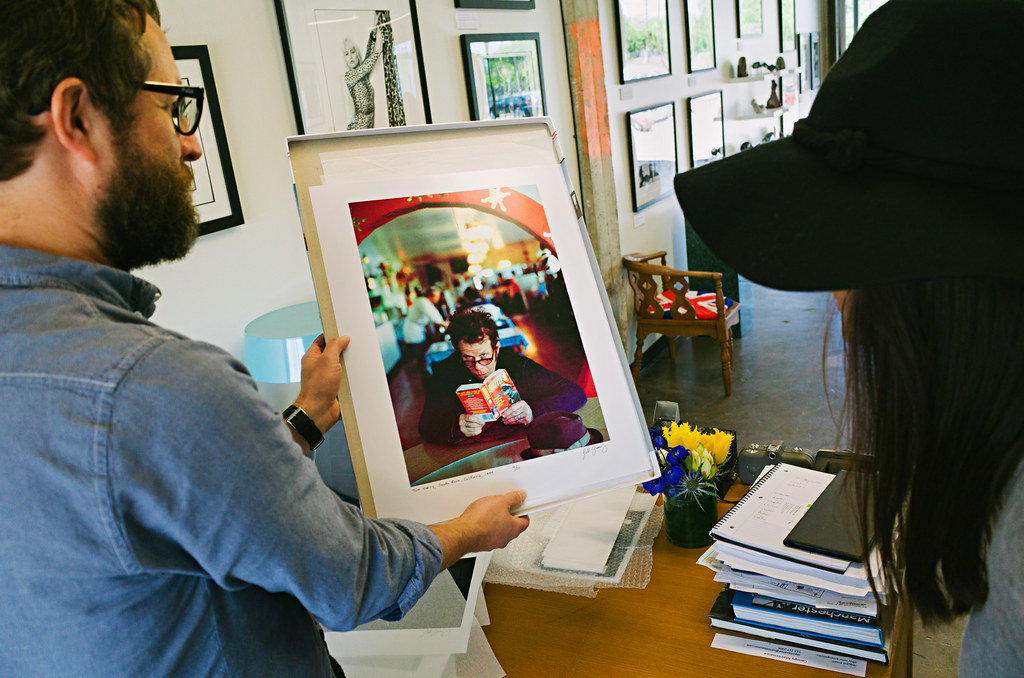 went to Modern Rocks Gallery, a very cool space that just opened up at Canopy, featuring amazing prints of musicians, as well as... actual rocks, 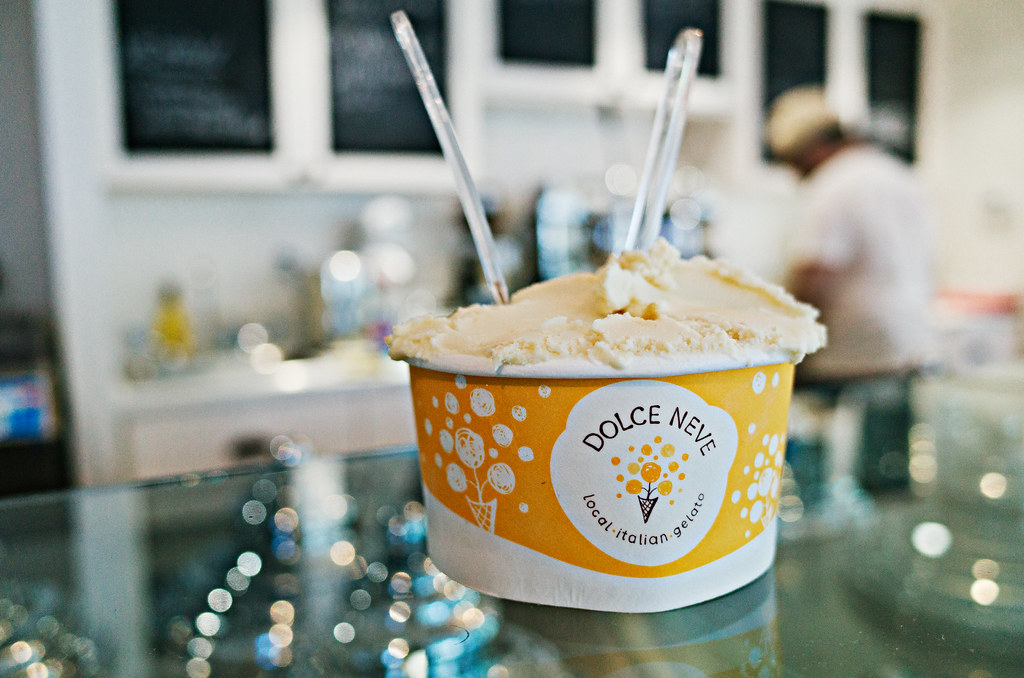 and got gelato at Dulce Neve, an amazing amazing new gelato place on S 1st St.

Had a really good time talking to her about art, food, and Blue is the Warmest Color, which we both saw recently. "When I get a nosebleed, I just want to rub the blood all over my hand and take a picture of it." She's cool yall. Afterwards, I went to a Good Friday service at my friend Taylor's church, where he pastors at. I felt quite awkward not knowing any of the hymns. It's weird that in a room full of singing and voices, you can feel the abscence of sound around you when you aren't joining in. Jack's wife, Kristin walked in and sat next to me and started singing in the most beautiful voice, filling in the silence... motivating me to learn the tunes quickly and join in as well. The bible story of Jesus' death was told by 2 narrators, a guy who clearly was just reading word to word and didn't know what was going on, and a girl who had the most eloquent and epic story telling voice ever. I still fell asleep though. 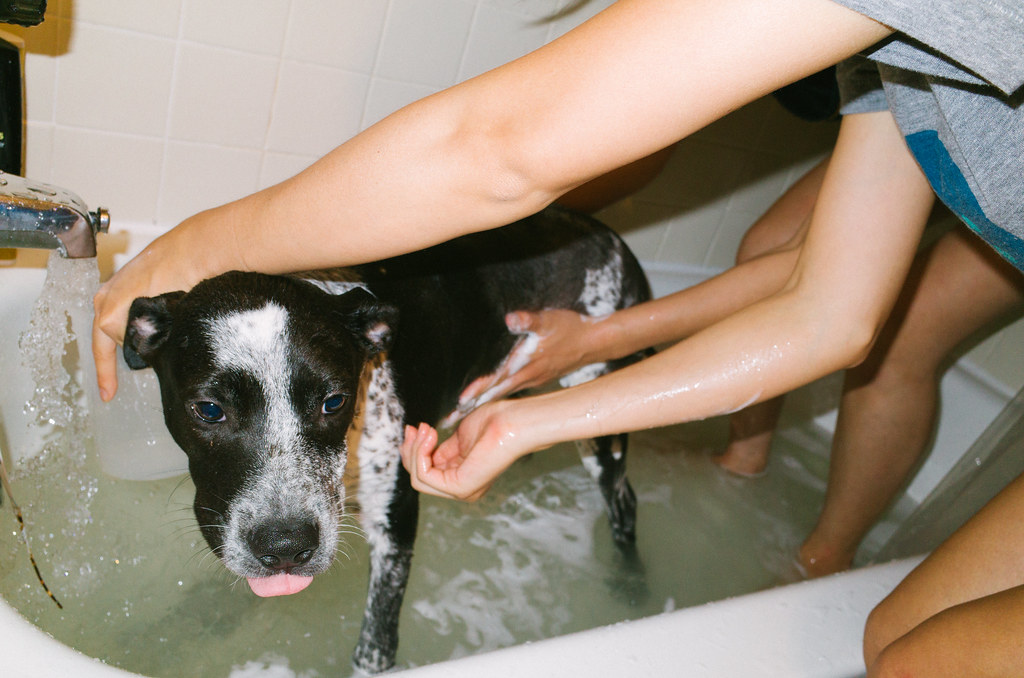 I went biking with some friends, followed them home to make it a longer bike ride for me, and arrived at their place to see a puppy that had pooped all over his cage. It was pretty darn gross. 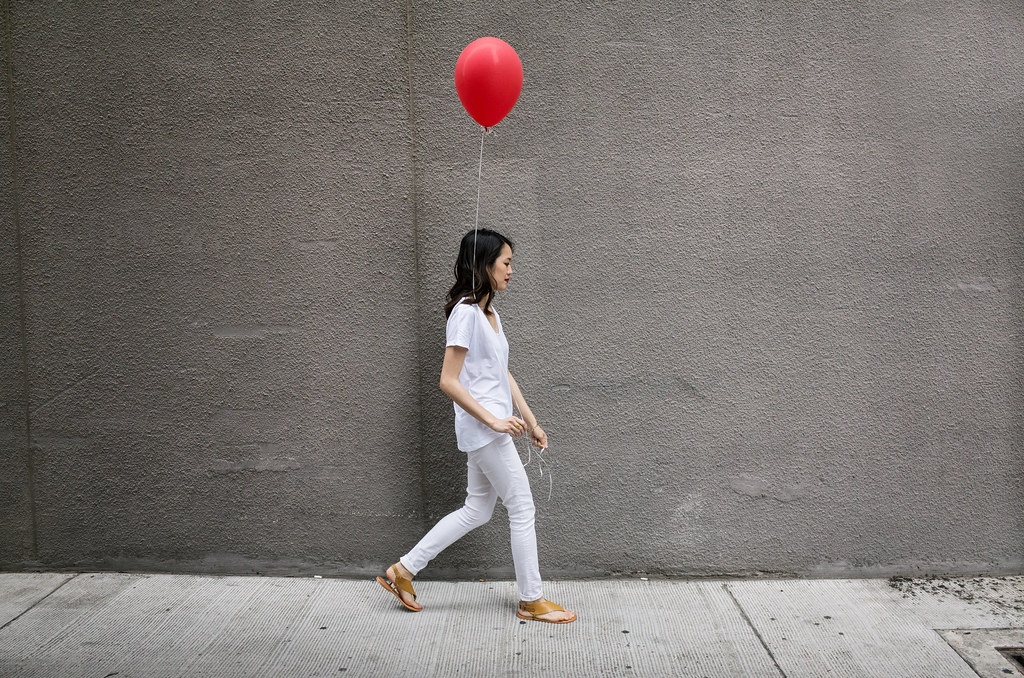 On Saturday I helped Madeline take some photos for the announcement of her new website. She had a concept involving a red balloon, a white outfit, and a plain wall. 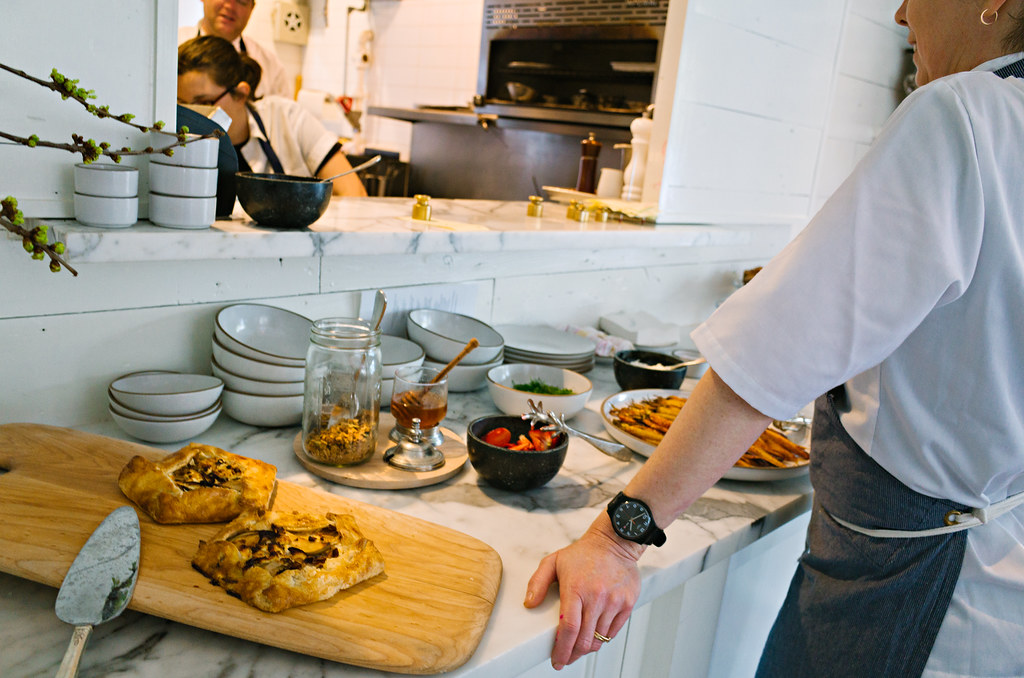 We had brunch at Josephine House. I was really scared it was going to be packed due to Easter, but luckily only the patio was full, leaving the inside almost all to ourselves. 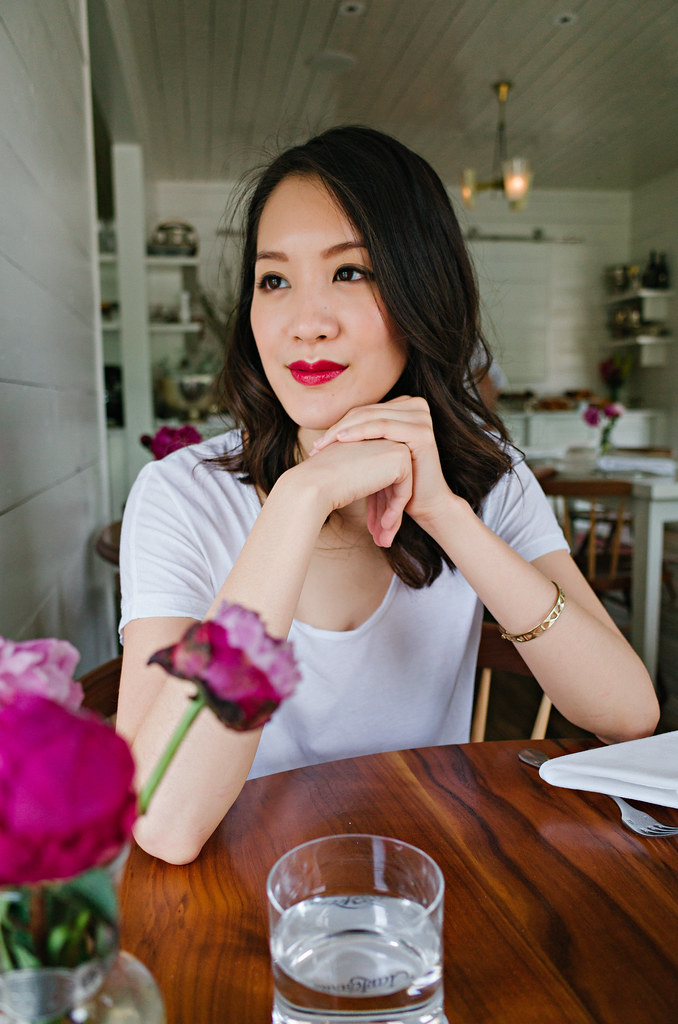 We ordered 2 kale juices, the savory porridge, baked egg with asparagus, and bread with butter. Definitely get the bread. I like the simplicity of their dishes. Very fresh and rich flavors coming from relatively simple ingredients.

Here's a photo of the porridge that Madeline took. Turned out better than my food photoz. They used oats in their porridge, giving it a more earthy flavor, which paired nicely with the dill, which also has an earthy tone, the creamy yolk of the poached egg, black eyed peas, and savory ham. 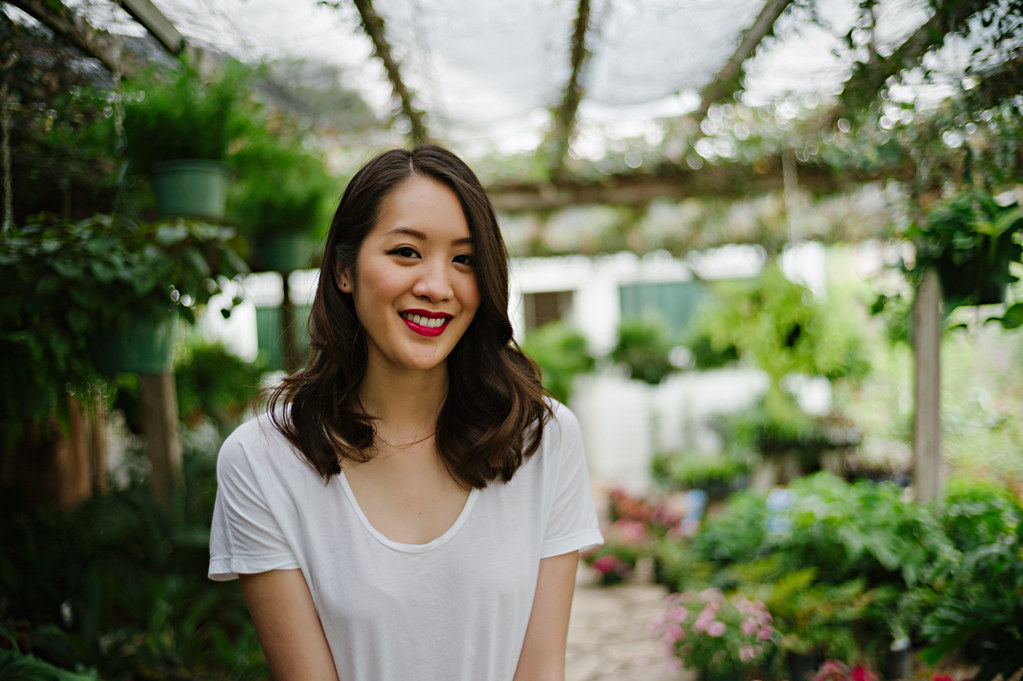 We went around town hunting for photo locations. There was a nursery across the street from Josephine House that looked promising... 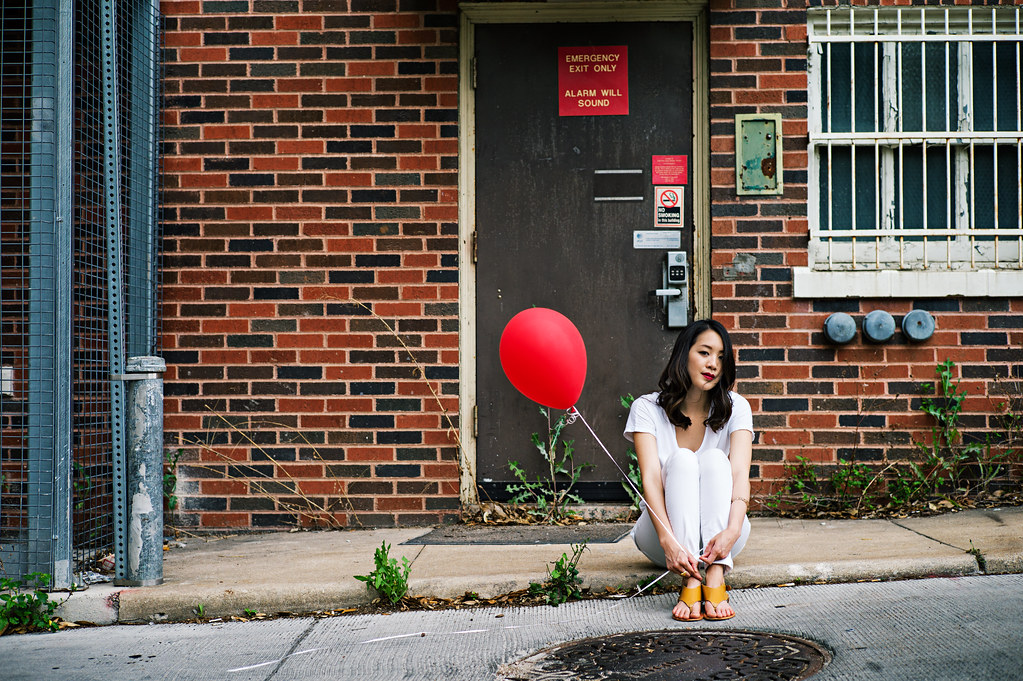 The alleyways of downtown turned out to be a bit better. 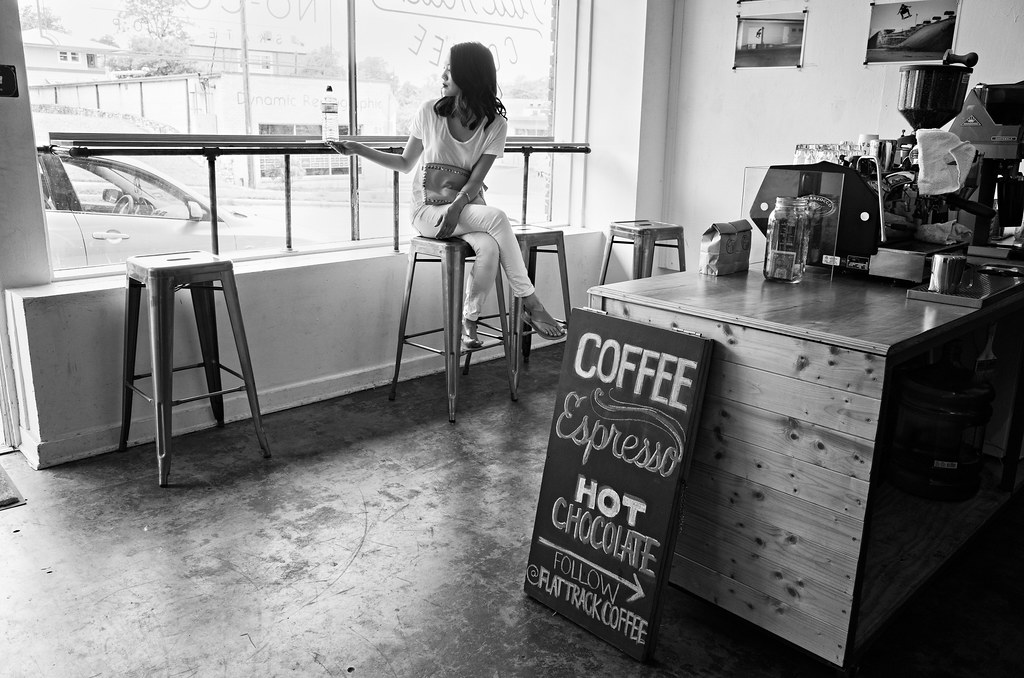 Feeling tired, we tried to get some coffee from Flat Track's espresso bar inside the skate shop No Comply on 12th. 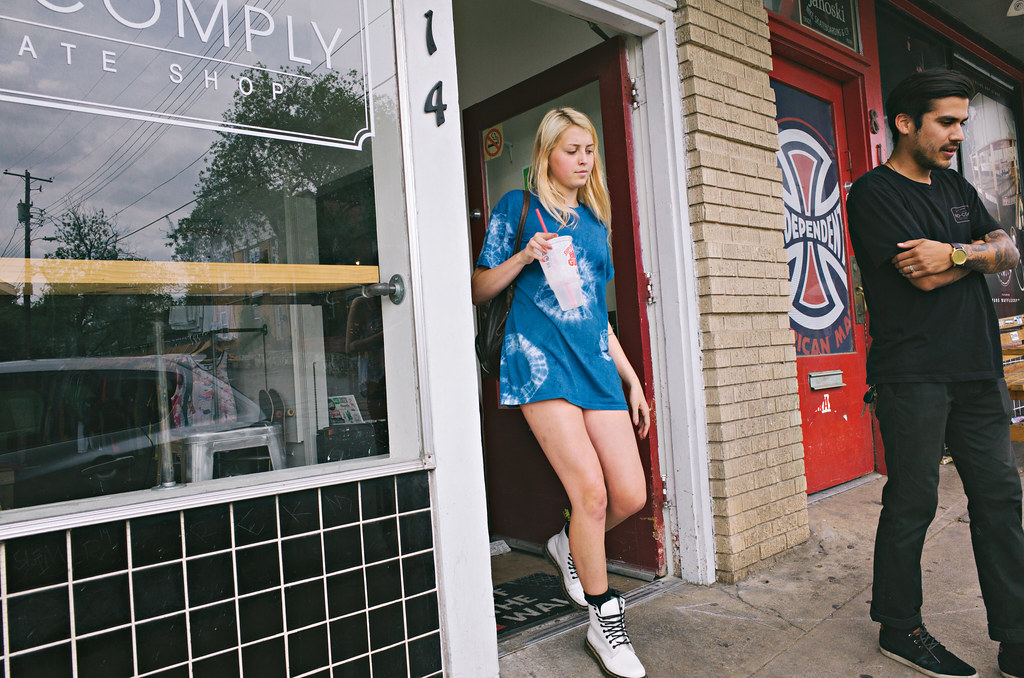 Unfortunately the espresso bar is closed on weekends, but it was still cool hanging out there watching the kids coming in from the skate park to check out their decks, shoes, and clothing.

We tied a balloon to Junebug, and watched her antics as she got used to her new companion.

I love this photo since it reminds me of the ones that Araki took of his cat. 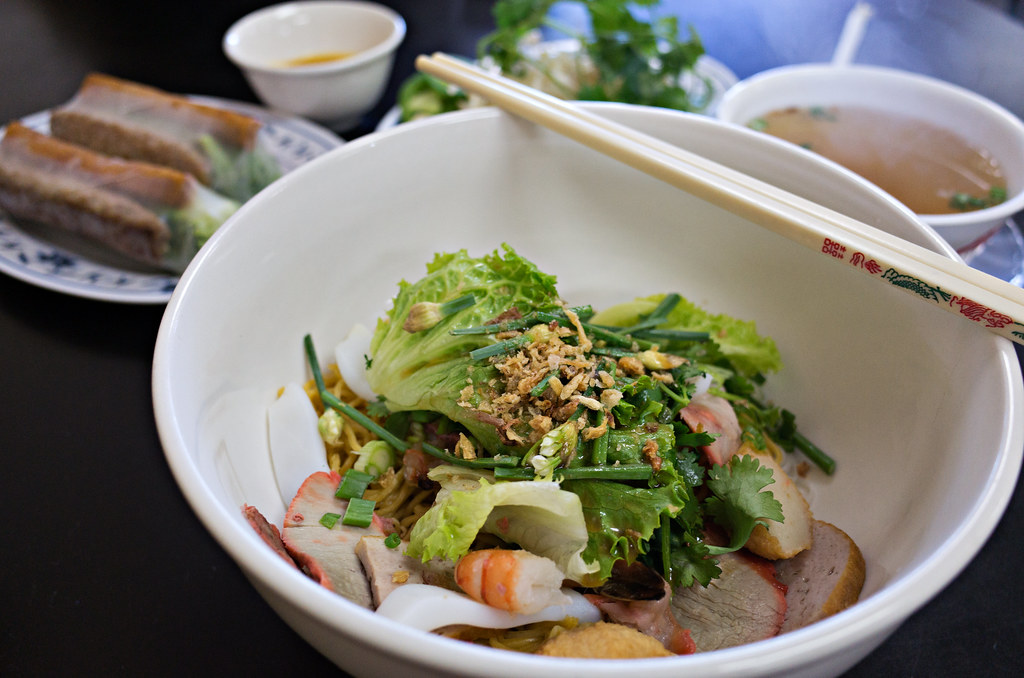 We went to Thanh Nhi for lunch the next day, it's a good option for lunch since you can get a banh mi for 3.50. I got a combination egg and rice noodle with seafood, the dry version, which comes with broth on the side, and of course the 1b springrolls, my total go to and favorite thing... possibly ever. We spent the afternoon at Brew & Brew editing balloon photos and the website.

At night, I went to an Easter Church service at Austin Stone. It was the first Easter service I've ever been to. It was basically a rock concert, with a live band and lyrics displayed on a large screen in front. The sermon was mostly about the amazing feeling accepting God gives you, and how it fufills the void that temporary things such as material possessions, sex, drugs, and alcohol can't fufill for eternity.

It was kind of contradictory that the pastor used dining at Uchiko as an example of a feeling that you can't describe with words, but I get the point he was trying to make. 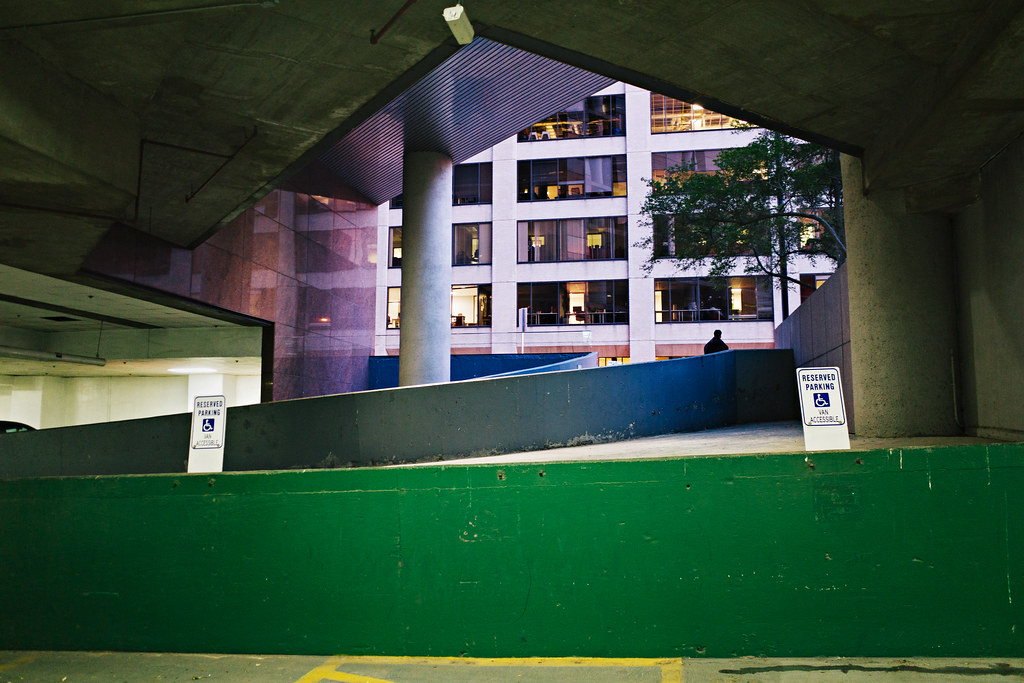 If you've been to my blog before, or even just looked at the pictures in the post so far... you know that's exactly what I'm about. Stuffing the void with everything that I can find.

Perhaps the feelings of uneasyness, unfufillment, and unrest are a good thing. I feel like I'm constantly on the hunt for something. It keeps me moving, exploring, questioning, curious.

The other day I was biking, saw 2 skateboarders and wanted to stop to take a photo of them. I braked hard, slipped on some gravel, and fell off my bike. My palms were bloody, and I could feel the moisture of blood sticking to the insides of my paint leg and arm of my jacket.

It's been a while since I've fallen off my bike... there's something about committing to something headstrong and getting shaken up unexpectedly. The ability to just do something without thinking or planning it all out, to go head strong, fall, and to get back up. 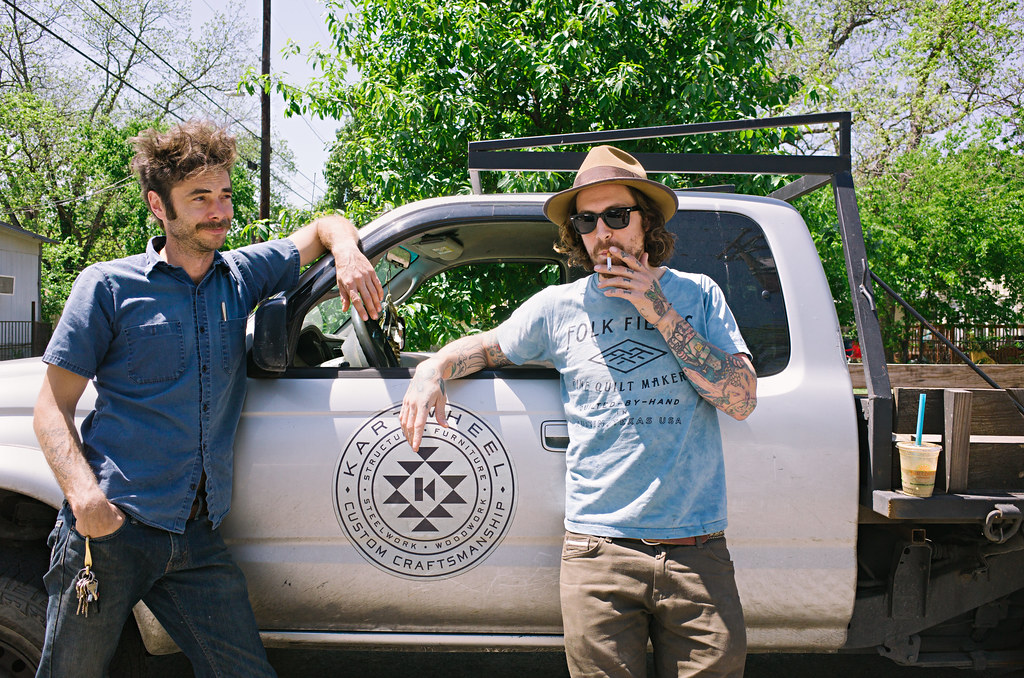 The unpredictable nature. The uncertainty. There's a beauty to it. Both the ups and the downs make you feel alive. The sharp pain from the scuffs you will encur along the way contrasts with the intense sense of joy of doing what really makes you happy.

Thinking about it... I should have taken a picture.

Speaking of new websites. I just launched a homepage/splashpage for myself. Check it out.

Definitely give me shit for not finishing my photo tutorial site.