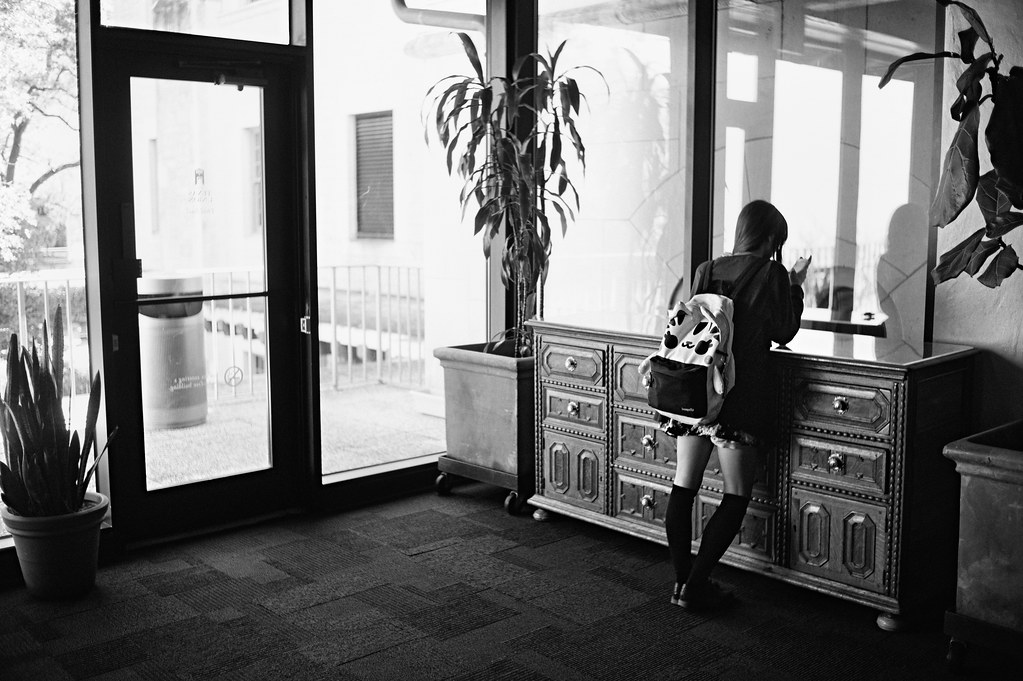 It's already March. In school, I usually start the semester somewhat strong, but seem to lose some resolve midway. Months like March and October seem to be when I'm at my weakest. It seems like nothing has changed. 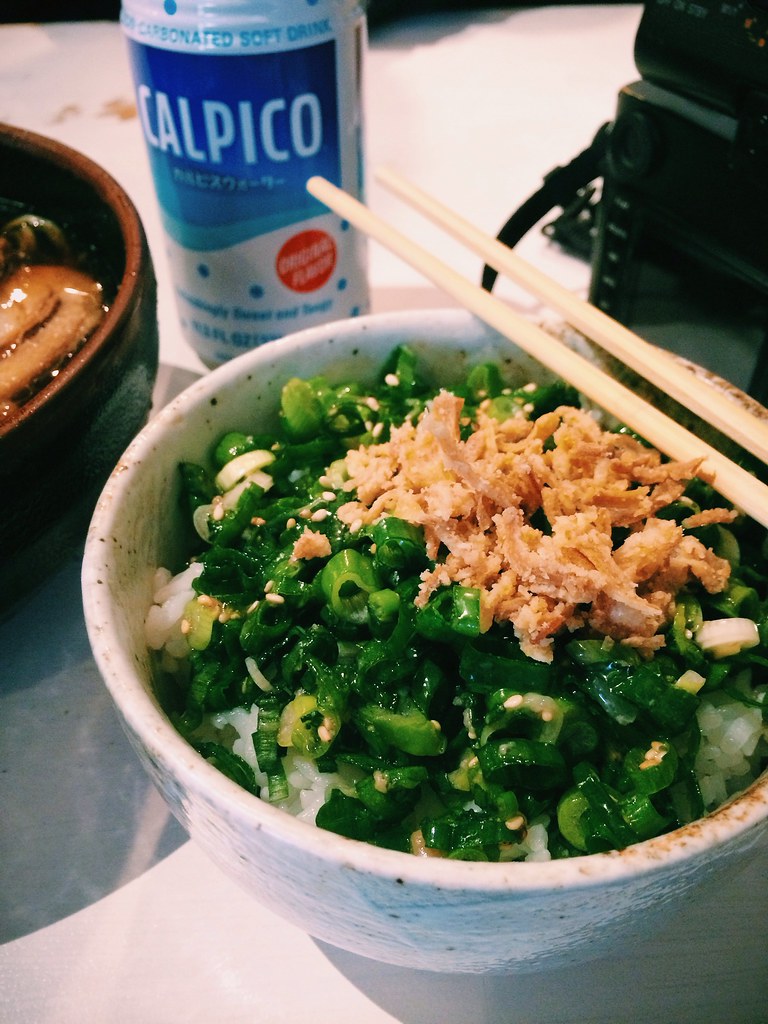 Today I had lunch with Gilbert, who teaches Javascript over at Makers Square, the leading web development coding school here in Austin.

I'm largely involved with Codervox, and here I was having lunch with one of the largest forces in programming education, and I really had nothing to ask him.

Let's explore the feelings a bit:

Intimidation: I've known Gilbert for years, he's been one of the most talented programmers I've spent time with over the past few years. He finally landed a gig teaching, something he's always wanted to do, and he's going strong at it. His passion is unquestionable.

This begs the question, why didn't I connect my team with someone of the likes of Gilbert? I don't think we're ready yet.

There needs to be some sort of guidance, but there's no one on the team that can offer that. We haven't had enough team meetings, we really haven't gone all in. The only person I feel who really cares about education on the team is Joe, and we haven't created a good environment for him to thrive yet.

Do I feel like coding education is important? To a degree, somewhat. And that's the problem.

I like walking people through assignments, it's rewarding for me in the sense that there's actually something out there that people want to learn and that I can help them. But big vision for the future of programming and it's role in society? I don't have that. I'm not swimming in that world yet, nor do I think I ever will.

As a team member, I can offer some things. I generally have good people skills and I love connecting people who I know will get along together with each other.

Because of that I can make some pretty cool stuff happen out of seemingly thin air by leveraging the amazing people I know. Lunch at Google? Sure, it's happening on Tuesday. Hackathon? We had one this weekend and my programming god friends Paul and Chris showed up.

The secret to it is, when you talk to someone, just get to the bottom of it. Figure out what they do, why they're doing it, and a few things that makes them tick. From there, hang out with them more, know more of their preferences and cater yourself to them, let them know that you took the time to learn more about them. An example would be even just selecting the right place to go out to eat or playing the right song in the car.

Gilbert likes coding, playing and listening to jazz, fighting and board games, tasty vegetarian meals even though he's not vegetarian, and his bike. 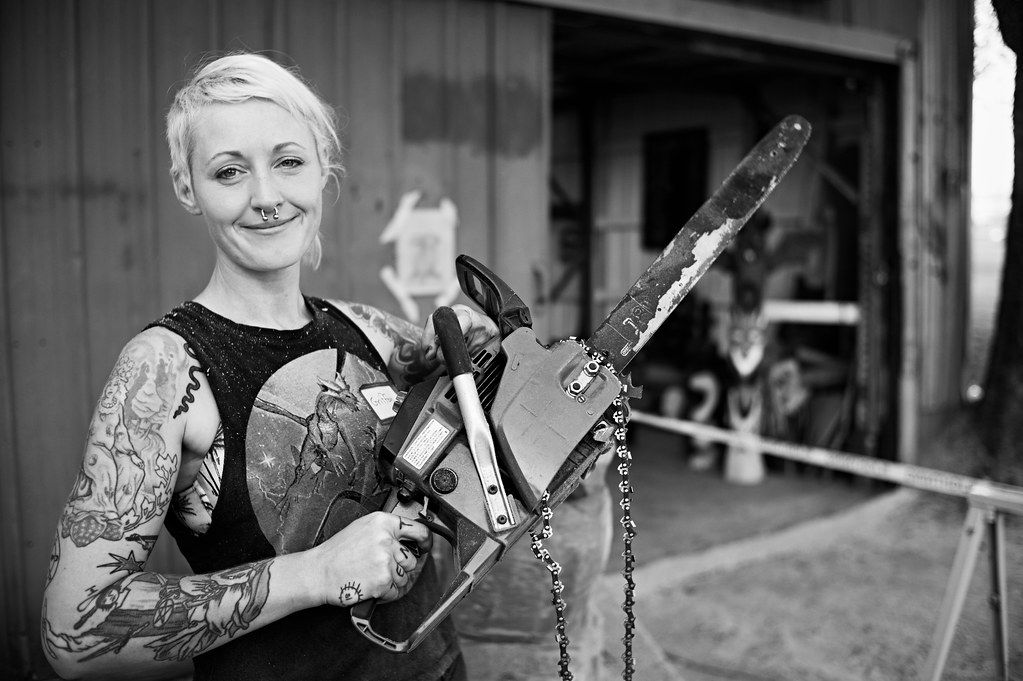 I know that this is not all what these people are into, but I'm trying to say that even the most inspiring, driven, and smart people around you are quite simple really, and even the toughest cookies will slowly reveal themselves to you if you just care to listen and observe.

We're all human after all. In general... nothing too groundbreaking, but I sure as hell didn't do anything remotely as cool as most of the groups while I was still in school so I applaud them for making the effort.

One quote that maybe sounded generic, but was actually quite genuine in my opinion was from 3DS' new lead organizer, Sartaj

The ability to know when you have something, stick it through the lows, and keep going.

Am I putting in my all right now? No.

Why? I don't know. Perhaps I feel something is amiss with the group we have. 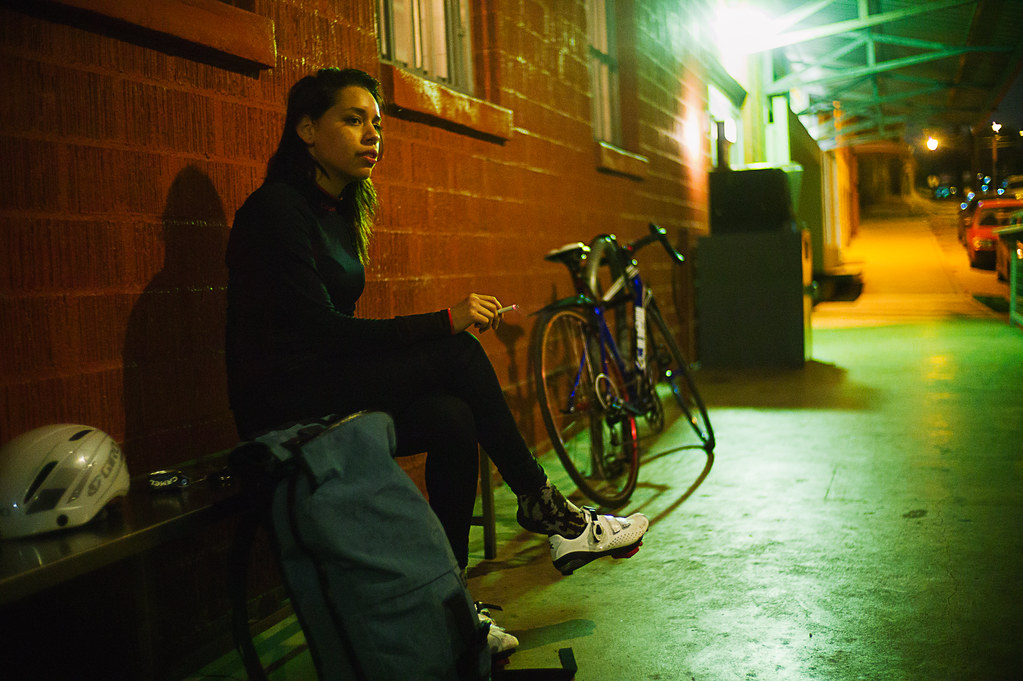 On Saturday we went to brew & brew after the hackathon and I ran into Monica. She works as a barista at Division 1, and goes to UT for art I believe. 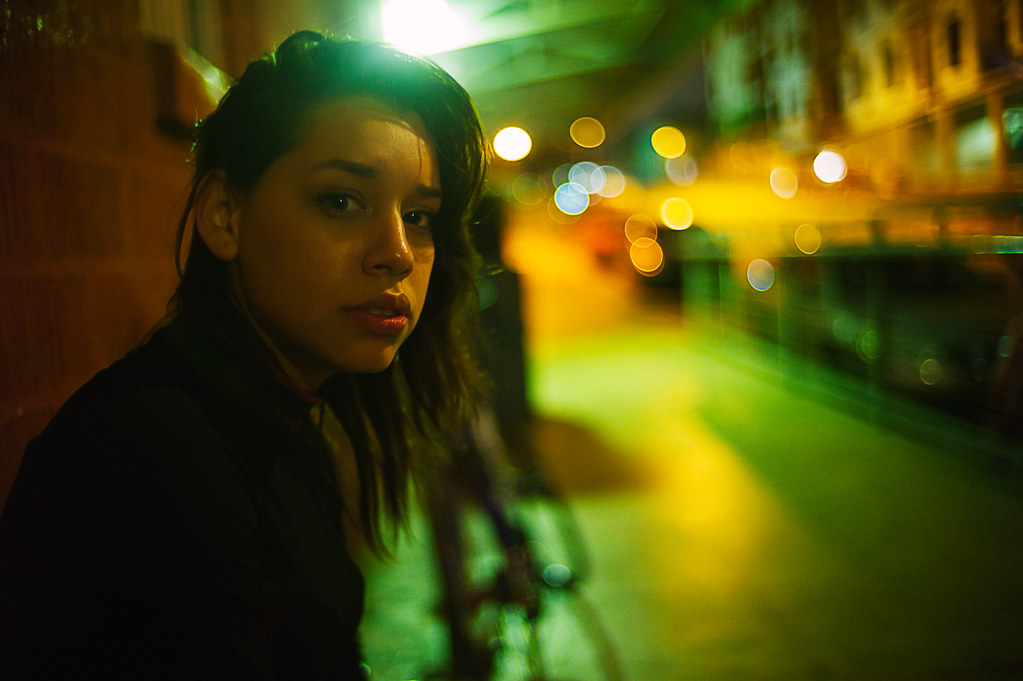 I had my camera on me and monica happens to be a fixie riding babe so...

I just picked up a Nikon SB-30 for my Leica. It's a really nice and portable flash. 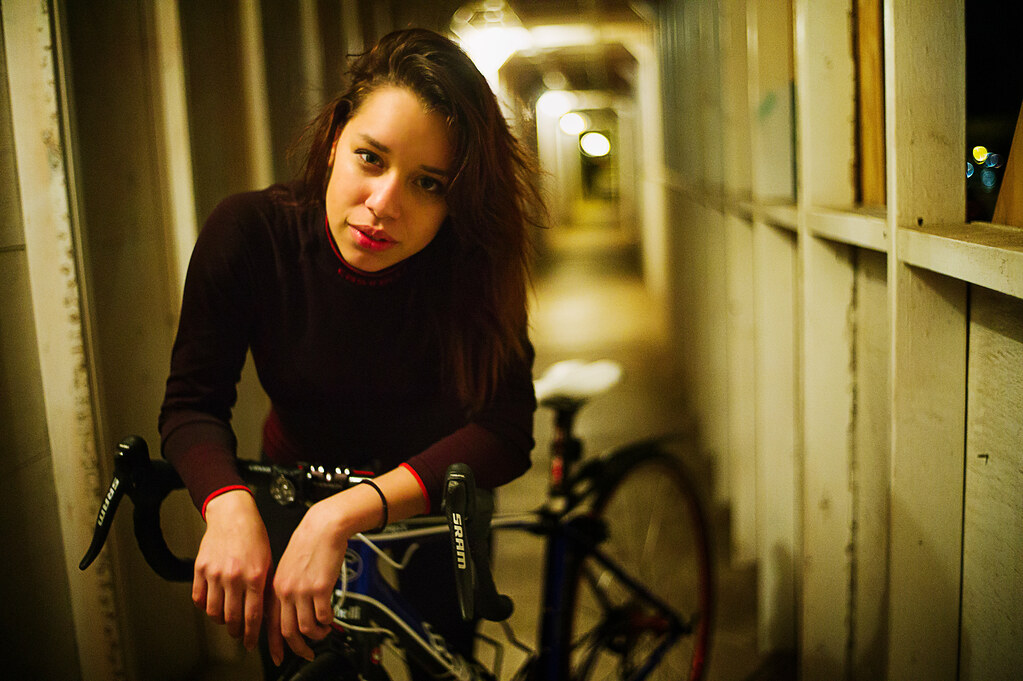 I always wanted to take a picture at the construction site next to brew & brew. In a few months it'll be gone and a freshly minted expensive apartment will start to terrorize the area. 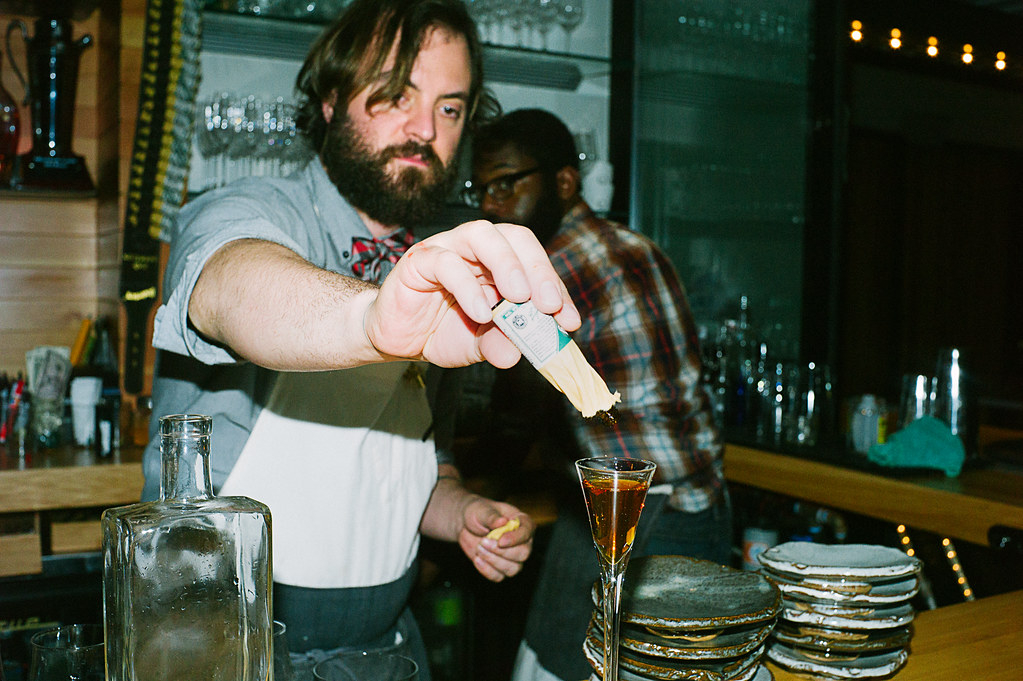 After brew & brew, Chris, head ramen master at Ramen Tatsuya somehow got in contact with me on Instagram to meet up with him at Shangrila.

We made our way through an insanely crowded East 6th St. We intended to go to The Liberty, but we ended up slipping into Qui.

For the first time, I found Qui to be inviting and homey. They have seemed to find their groove, and it shows from even the drinks at the bar.

One interesting thought that came up was, when you have a Ramen shop, it's all about consistency, and sometimes you need to have an outlet of creativity once in a while. 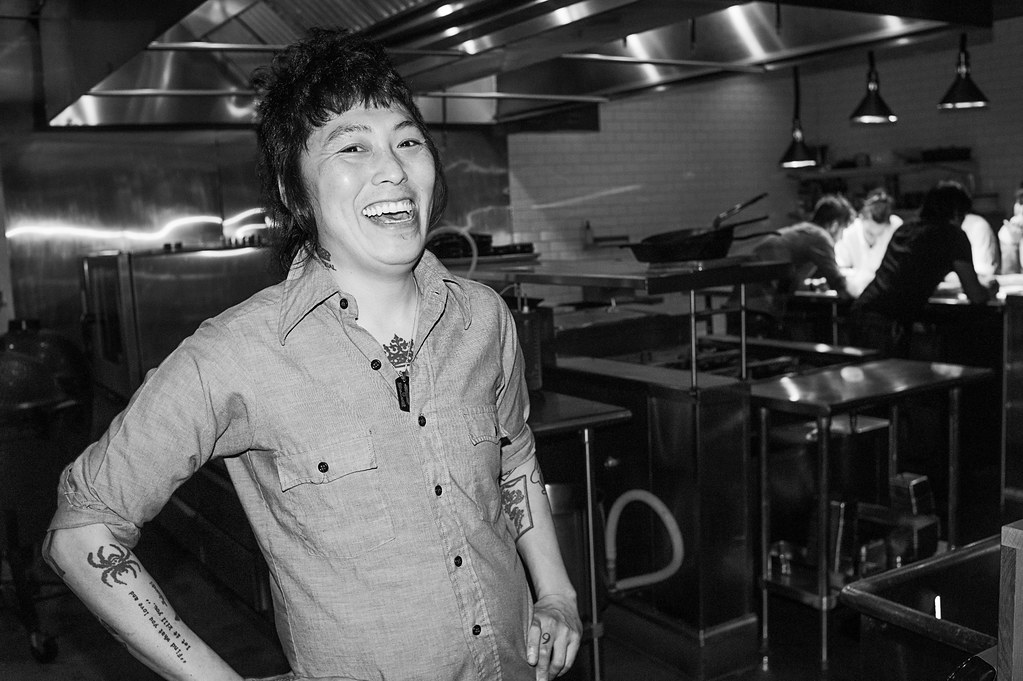 It seems that they got Yoshi to join the team, he adds a certain bit of character to the mix. 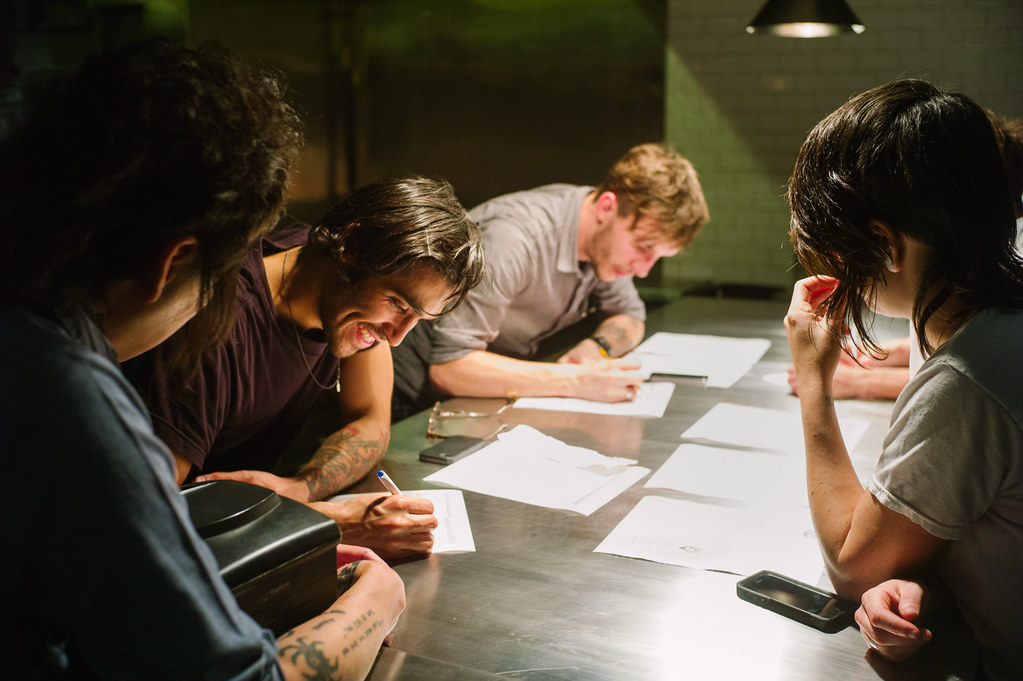 A moment, of some of the core team taking care of business. 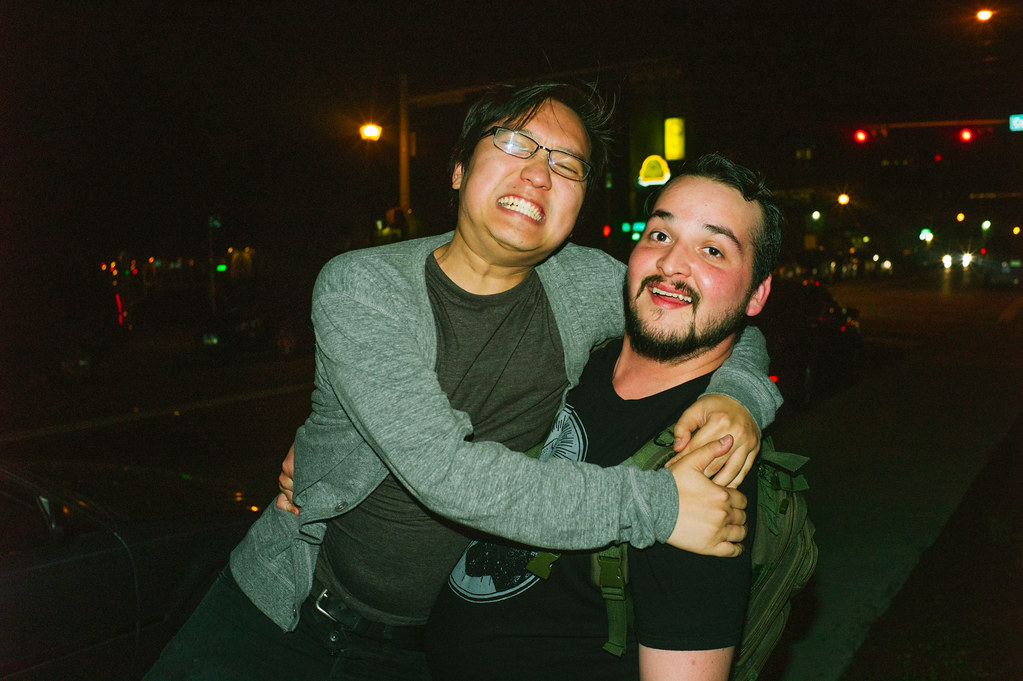 So those are some highlights from this weekend.

I missed out on the Menuhin competition this past week, that's a bummer.

I'm also excited to get my Ricoh back from repairs this week.